Jayne Matricardi-Burke
I look forward to skyping soon. Below are (too many!) images with notes, and questions here and there-- picking up from where we left off last year. I tried to keep it as short as possible... but it's still a lot of homework for you. Sorry! This last year has really been a struggle- mostly I'm feeling like I'm trying too hard, and worrying to much. I've been having a lot of trouble gaining enough mental space (between my nature to worry, my overwhelming teaching schedule, and raising Finn and Theo). But anyway, I'll explain more when we skype, and I'm sure my work will speak for itself, flaws and all.
Section A:
At the end of last summer's skype crit, I remember you saying that I MUST keep working immediately after my show so as not to lose momentum. But, of course, I stopped working and teaching started, and I got totally discombobulated, frozen and scared. Generally, after my show I felt tired of all the detailed drawing, and I missed canvas, and so I made a bunch of half-hearted failures that were trying too hard and ended up stiff and awkward. Below are two of them. I don't think I need a crit on these because I can see the issues. And I just generally can't stand looking at these. But this is how last Fall started off.
I did do some mini studies, experimenting with water soluble graphite on rabbit-skin glued canvas, with a bit of vellum layered on top. Here's one of the experiments that I really liked. I had a desire to scale it up, and re-make it on a very large canvas, but I froze with fear that it would not have the same feel or atmosphere.
Section B:
The one (& only) success of last Fall's semester was this piece-- taken from a photo of my great-uncle as a baby on a pony. I fell in love with the original photo because... well, just look at it!  It's also a "hidden father" photo with my great grandfather's feet visible under the pony holding the baby up.  I identified with the pony: when my boys were young, I was the pack-animal, the beast of burden, resigned, serving my children. While I was/am very fond of this piece, it seems to have been a "one-off" and didn't lead to a series or more work...
Section C:
Then in January, a studio space at the University opened up for me, so that has been nice! 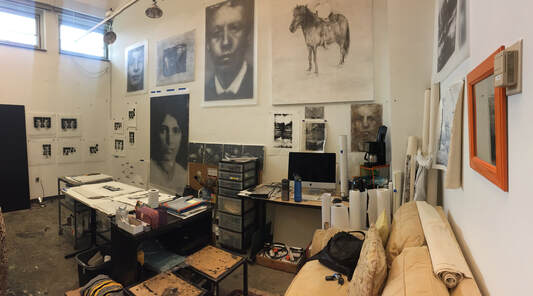 Section D:
Meanwhile, as I was thinking about the "hidden mother" photographs, and how I could build a more personal connection to them, I took a serious of digital photographs of my own hands-- taking on the positioning of the mothers' hands from the photos-- without the children, or even the body of the mother. And then I tried to work from these images in different ways. First I made some terrible and super tight paintings, not pictured, they are too terrible.
I then felt the need to reference the body, and discard vellum for canvas, and so I cut canvas pieces to my height and placed the hands (using water soluble graphite) where they would be on the body. I was making this piece while the Mexican migrant crisis was coming to light, and really felt like it represented the migrant mothers whose children had been taken away at the border. While I felt that moving in this direction with unstretched canvas might have some possibilities, it wasn't received all that well in crit.
Section E:
As I was floundering through the Winter and into Spring, I was selected to participate in a show called "Alchemical Vessels" in which each artist was given a 1ftx1ft wooden panel, as a standard surface to work on, and we were each give an excerpt from a poem to respond to. So I decided to go back to drawing on vellum-- but in these I layered my drawing on top of a photo transfer of the hands ( so there is a gessoed wooden panel, then the photo transfer on top, then a layer of vellum with graphite on top of that). Since I had no direction for the semester, after I did one panel, I then did a whole series of them. I became really interested in rendering the imperfections of the image transfer, the "mistakes", splotches, cracks, etc. in the way I rendered the dust and scratches and damage from the tintypes in previous work. The process felt therapeutic, cathartic. But at the same time, in the end, the pieces still seem too tight and stifled. I decided that the size was too small, and working on the wood panel was too dense.
Section F:
As I was working on the small panels above, I was also working on the larger pieces below. These are NOT attached to panel, they are just two layers of vellum, one behind with the photo transfer, and one in front with the graphite drawing. I'm enjoying the softness, like a fuzzy focus that the layering creates, and the depth of looking through a layer of graphite to the photo transfer. I feel like it references ones' past, or a hidden aspect of ones' self. And I think I like where these could be headed. I'd like your opinion on these and where you think they could lead me.
Section G
These are some experiments in shining light from behind, to play with the transparency of the vellum.
With the litho below, I was attempting to merge imagery (mother, landscape, ships) and get back to the feel of some of my older pieces that we looked at a year ago. But in the end I feel it's just trying too hard, too much going on. Although, if I isolate the portrait-- I feel like it has some possibilities. Wondering if you agree with these thoughts.
I also did multiple prints which break up the image of my great-grandmother into a jumbled grid. This came about when I had multiple files on my computer of little pieces of the portrait, each a separate digital file, in order to print them to create the large photo transfer you saw in the "light experiment" above. The files were on my computer screen, and depending how big I made the window on the screen the files would arrange themselves in different ways, like you see below. I felt like it was representing how broken apart and "all in pieces" I have felt for the past many many years- trying to raise the boys, and losing myself in the process. Trying to pick up the pieces of myself. Trying to put myself back together again, reaching towards wholeness. I am wondering if these have potential to you? Or are they moving in the wrong direction?
In the litho below, I have layered two pieces of thin semi-transparent mulberry paper over each other, so that you can see a bit of the "ghosted" print coming through. My professor asked what the mirror image meant to me, and I feel like for me it is referencing: witnessing the self, empathy for self. And after the witnessing and empathy for self comes witnessing and empathy for others.

Image 14: ~ 9 in x 16 in
Finally, here's a picture of all of us this summer. Can you believe how big the bambini are?! Look foward to talking soon. Much Love, Jayne 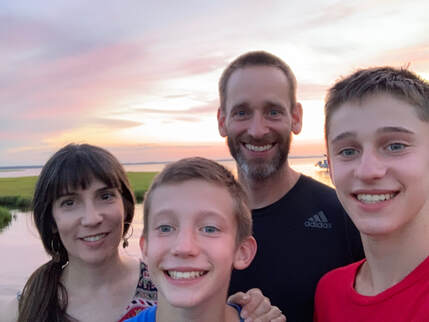